I took a little break from running after completing a half-marathon in Nashville a few weeks ago. And then I had oral surgery (dental implant), and during a recovery period, couldn’t run. So I ended up going a little over 2 weeks between running 13.1 miles and my next run, of 4 miles. It’s been beautiful–high time for running. Warm but not too warm. Sunny.

I realized something when in Nashville for the half about my running. First, I should note that I rarely have motivations that are not in some way social. Not necessarily directly and in a micro kind of a way, but more about being in a community, being part of something that is social. And I had thought of running as a way to maintain some of my friendships and relationships, a connection of that sort. But I hadn’t realized how much my running habits had, somewhat by nature of the city and community I live in, been social. I trained all on my own. I didn’t have anyone to go on runs with, and the only runs I went on while training were when I was visiting someone.

But I run at a track. And I realized I had been studying the people at this track, and the culture there. The middle of the track has a soccer field, and there is a Polish population north of the park where the track is, and a Mexican population nearby, as well as I believe Dominican/Puerto Rican (really, you can’t go far in New York without there being a Dominican or Puerto Rican population…).

So the Poles and Mexicans often are out in what seem to be pretty organized soccer games, and then there are the runners. The soccer players are regularly accompanied by their wives/girlfriends/children. So there are lots of kids playing around, acting as though the track is no different than any other piece of land. And the soccer balls come flying onto the track with some regularity. It is kind of beautiful, though I have been hit (really hard) by a wild soccer ball, which was somewhat annoying. But I realize that I actually sort of relish the mix of populations. Awesome. It’s what I love about New York. So my running is social. Just in a cultural exploration kind of a way.

I got a photo of the Tea Party ad! Yay!

The title of the post is the caption on a subway advertisement that I spent about 5 full minutes trying to figure out how to take a picture of, but due to the crowded train and creep factor, was unsuccessful. The best part about the ad poster is that it hung directly over a seat that moments before had been occupied by a man with lots of I <3 Jesus buttons, a hat that said “Jesus” and an accompanying button requesting that we stop abortion with the requisite science fictiony fetal photo.

The ad is for a well-advertised storage company. Clearly, they have a liberal edge because in the summer and fall of 2008, they ran a campaign with a headless body that was quite clearly Sarah Palin stating, “What’s more limited–her experience or your closet?”

The tea party ad includes a picture of a tea pot, poured by a body-less hand into a tea cup with saucer. I suppose the inference is that liberals should be so disturbed by the tea party movement that they must store their accoutrements for tea parties until the movement is over (good luck with waiting that one out–I think it’ll be a while). Cute. Though both are pretty heavily political, which I find interesting for a storage company–something decidedly apolitical. I guess people without enough money to afford endless apartments in Manhattan are all liberal??! Strange to bank on that in your advertising, but I get a chuckle out of the ads. So whatever.

Some other fun photos:

(would’ve been great for the seat above that abortion dude) 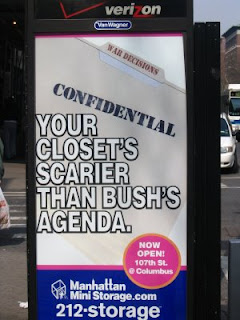 There are lots of smells in New York City. You walk by a pile of trash. Or somewhere where someone has recently urinated. You know. But rarely do you actually see New Yorkers reacting to the smell. You just sort of come to expect it.

Today, I managed to get on two different train cars that had such offensive and strong stenches that people actually reacted.

The first was this morning. The nature of this smell was, to my best knowledge, urine. Maybe mixed with body odor. It was fairly obvious that the unwashed, sun-darkened man at one end of the car was likely responsible for this delightful mixture. It wafted occasionally into my nose and I must admit, I felt a bit sick, which I usually don’t. It was high on the list of strongest smells I’ve experienced here.

But this evening was no doubt the worst smell experience of my New York life.

Imagine someone took a smelly shit in a train car, then let it sit there. That was the smell. Like I said, never before have I seen people visibly react to a smell. But in this car, I saw at least 4 people covering their noses. It was stench for sure. One stop later (luckily mine), most of the car got out and the woman in front of me warned a couple about to board the car that it would not be a pleasant experience. They smelled it and thanked her. This was out of the ordinary.

I’m happily on a different train at the moment, one that lacks any distinct smell. I’m not entirely sure how to deal with such disgusting smells–I have stayed in uncomfortable train cars (hot, smelly, humid, crowded), and there’s something about whether you know who the person who smells is, which I find interesting. Even when someone smells, we don’t want to offend them by admitting that we notice. I think that may be part of the reason people were so open with their disgust in the shit train car–there was no obvious location or person it was coming from.

Smells: just another thing New Yorkers are strangely often willing to put up with to live in this beautiful, crowded city.

“I don’t thing I need to worry about marriage right now. I’m 23.” -blonde chick on a cell phone in Macy’s, Herald Square